How we came to breed Welsh Springer Spaniels 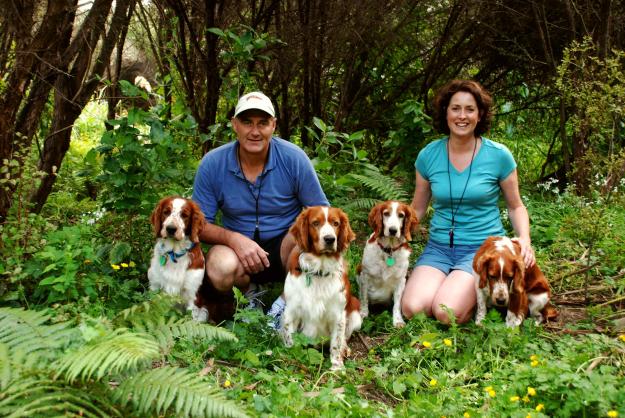 Shane and Maxine with their four Welshies

In 2002 the selection of  Welshies having litters in New Zealand were few and the waiting list years out.   Whilst liaising with John Phillips the acknowledged expert of the breed, we researched the breed in the UK and Australia and in 2005 imported Slyvkin Madigan as a 13 week old puppy and Llanfair Kennels was formed.

We started off with one and currently live with four Welshies – Madi, Gus, Astra and Rocco and are in co-ownership with another four Welsh. To improve the gene pool in New Zealand, Llanfair has researched lines and imported semen from kennels in Australia and Scandinavia to diversify and improve our spaniels and are delighted with our litters in 2008, 2010 and 2011.  Welshies from those litters have been made up to show champions, others are doing well in the field but above all they have become great family companions.

We thank Slyvkin and Clumbrolds Kennels together with all the vets, colleagues and friends that have supported us along the way.

For us, health and temperament are essential attributes. Llanfair Kennels is one of the founding member of the New Zealand Kennel Club (NZKC) Accredited Breeders Scheme and feel that on going health checks and openly sharing health information amongst other breeders is the best for the breed.

First and foremost our Welshies are our pets. We also show them, and Shane trains and promotes them in the field as well as taking them out hunting during the game bird season.